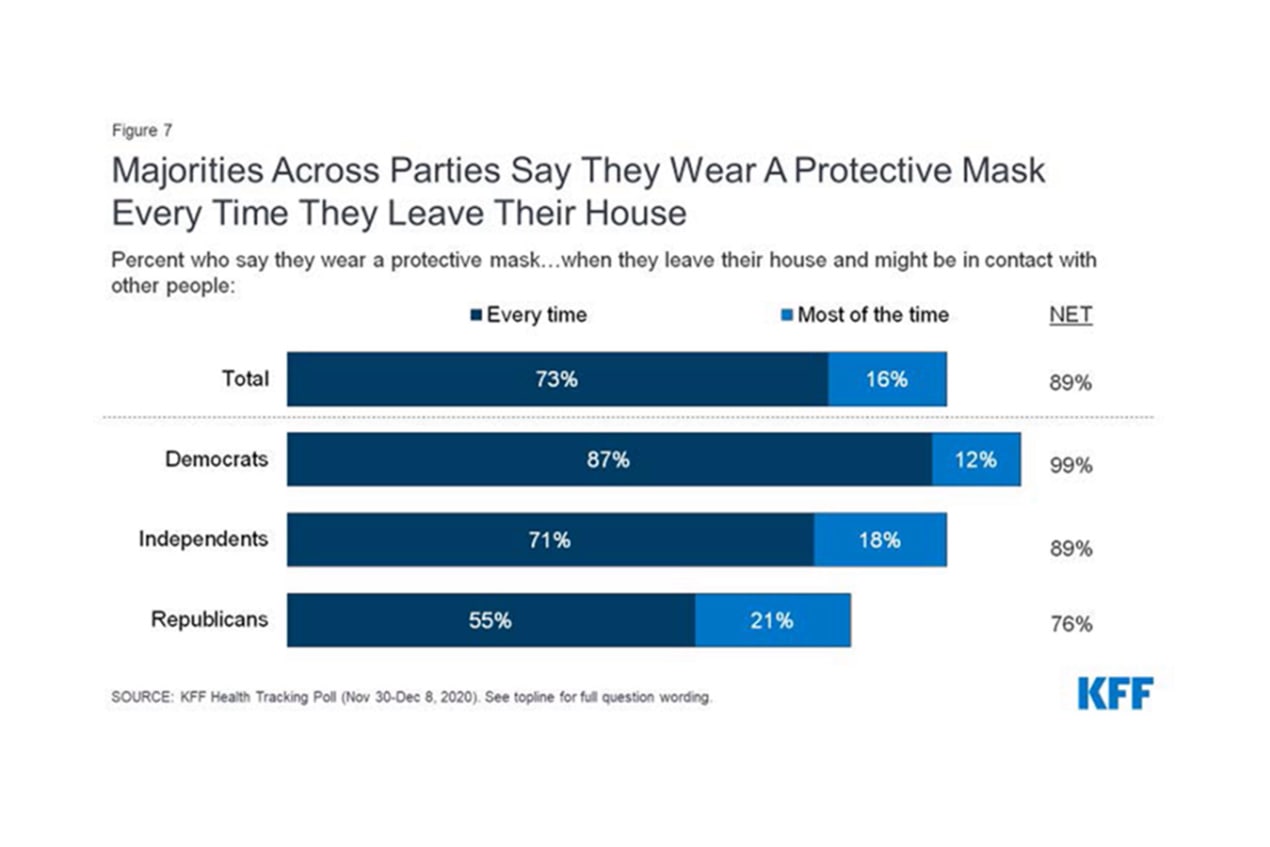 As apprehension about the pandemic intensifies, more Americans — nearly three-quarters — say they wear masks every time they leave the house, according to a poll released late last week.

The poll from KFF also found that 68% of American adults were worried someone in their family will get sick from the coronavirus, the highest level since the nonprofit began tracking the question in February. The public was least worried in April, when 53% were concerned the infection might strike their family. Since April, fewer than half of Republicans have consistently expressed fear that a family member will be sickened by COVID-19. (KHN is an editorially independent program of KFF.)

The latest survey, conducted among 1,676 adults from Nov. 30 to Dec. 8, found that 51% of Americans believed the worst is yet to come from the pandemic, which has claimed more than 300,000 lives in the U.S. The height of optimism occurred in September, when 38% of adults expected things to get worse.

Public support has risen for consistent use of masks, which has been a highly politicized marker of partisan affiliation. The poll found 73% of people said they wear a mask every time they leave home, an increase of 21 percentage points since May due to greater compliance among all partisan and age groups. The same percentage of 73% of respondents said they believe wearing a mask is part of the communal responsibility to prevent the spread of COVID, though nearly half of Republicans view it primarily as a personal choice.

While 87% of Democrats said they always wear a mask out of the house, 71% of independents and 55% of Republicans said the same.

Seven in 10 adults said they are prepared to adhere to physical distancing guidelines for another half-year or more until vaccines are widely available. Nearly 9 in 10 Democrats said they had the wherewithal but only half of Republicans did.

About half of Americans said stress related to the coronavirus has affected their mental health. The concerns are most widespread among women, young adults, minorities and people who have lost income, either personally or via their spouse, since the start of the outbreak.

Unmarked Graves of Indigenous Children Are Found in Canada

KPMG Women’s PGA: Charley Hull one off the lead after four-under 68 in Atlanta | Golf News